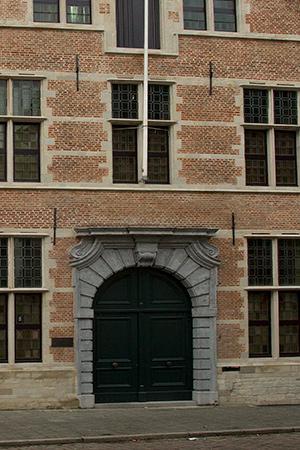 Frans Snijders and Margriete de Vos Frans Snijders married Margriete de Vos in 1611 and the couple moved into number 17 Korte Gasthuisstraat, where they lived for about ten years. In 1620, Frans and Margriete purchased De Fortuyne in Keizerstraat, which would be their home from 1622 until their deaths. The house was previously occupied by the Antwerp magistrate Marco Antonio Perez, a cousin of Adriana Perez and three-time alderman. Adriana had already died by that time.

The Snijders residence was described as a house with a gate and courtyard. The main building had three stepped gables and an annex.

This patrician’s residence was also purchased by KBC in 1970 and restored. It served initially as a training centre for the bank, following which its stylish rooms were used as multipurpose reception spaces. The Snijders House has now been integrated in the museum complex that will open in February 2018 as the ‘Snijders & Rockox House’.