Dealers in jewellery and precious stones

Copyright: Leipzig, Museum der bildenden Künste, Gonzales Coques, Familie DuarteDiego Duarte (Lisbon?, c.1544–Antwerp, 1626) left Portugal around 1570 to settle in Antwerp, where he joined the city’s community or ‘nation’ of Portuguese merchants. The nation organised the import of spices and other goods, including diamonds and pearls, from Portugal’s colonies to Northern Europe. Diego built up a business in Antwerp trading in precious stones. His son, Gaspar Duarte (Antwerp, c.1584–1653), also became a dealer in jewellery and gemstones. Gaspar’s mercantile spirit brought him both wealth and power, and in 1641 he was appointed consul of the ‘Portuguese Nation’ in Antwerp. He made the acquaintance that same year of the Dutch diplomat Constantijn Huygens, with whom he corresponded throughout his life, first and foremost about music.

Copyright priveverzameling, Jacob de Formentrou, Een heer die een luitspelende dame het hof maaktGaspar was married to Catharina Rodrigues (1584–1644) and the couple had six children together: Leonora (1610–1678), Diego II (1612–1691), Catharina (1614–1678), Gaspar II (1615–1685), Francisca (1619–1678) and Isabella (1620-1685). In 1615, Gaspar senior purchased a mansion on the Meir, between Kolveniersstraat and Otto Veniusstraat. It was the idea home for his growing family. Contemporaries swiftly christened Gaspar’s house on the Meir ‘the Antwerp Parnassus’, referring to the mythological mountain that was home to the muses. Visitors to the Duarte home were immersed in art. There were paintings everywhere: Gaspar Duarte began an exceptional collection that was further expanded by his son Diego. Most of all, however, there was music in the house!

A house full of instruments 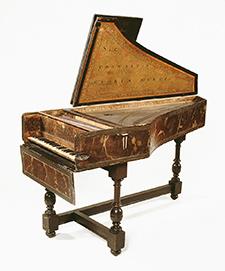 Copyright, Antwerpen, museum Vleeshuis | Klank van de Stad, Andreas Ruckers I, KlavecimbelThe residents of the ‘Antwerp Parnassus’ owned at least five harpsichords and virginals, not to mention a claviorgan – a combination of a harpsichord and an organ. Gaspar Duarte was closely acquainted with the Antwerp harpsichord maker Joannes Ruckers and his nephew and apprentice Joannes Couchet and even advised them on the design of their instruments. The Ruckers-Couchet family built what were probably the best harpsichords and virginals in the 17th century. The Duarte home boasted an ample repertoire for these instruments: around 1628, someone in the family – probably Gaspar I– commissioned the Messaus-Bull Codex, a hefty manuscript containing harpsichord music most of it by the English composer John Bull.
Gaspar had a fine singing voice and played several instruments, including the violin and harpsichord. His children shared his musicality, creating all sorts of possibilities. As soon as they were old enough, Gaspar organised concerts at his house with his daughters Leonora, Catharina and Francisca.

II 1632, Gaspar and his sons Diego and Gaspar II, followed a large number of Antwerp residents, Anthony van Dyck amongst them, to England. Like other Flemish merchants, craftsmen and artists, they hoped to win commissions from the opulent court of King Charles I. They were not disappointed: in 1635, the king appointed Diego Duarte II ‘Jeweller in Ordinary’, jeweller to the royal court. Diego junior later joined the landed gentry in England, when the king presented him with a country estate and the associated privileges in lieu of unpaid bills. He made the acquaintance in court circles of leading artists, patrons of the arts and nobles, including the Cavendish family and the court composer, painter and art collector Nicholas Lanier. In 1642, Diego sought permission to visit Antwerp for a while, during which time civil war broke out in England. The king was imprisoned and eventually executed, prompting many royalists, including the Cavendishes, Nicholas Lanier and the heir to the throne, the future Charles II, to flee to the continent. They all received a warm welcome from the Duartes, leading to evenings full of music with the Cavendishes and Nicholas Lanier.

Gaspar Duarte I died in 1653 and was laid to rest in the Church of St James to the strains of a requiem mass by Philippus van Steenlant. The family business was subsequently run by Diego Duarte II, who built up a network stretching from Amsterdam to Paris and London to Goa. Music remained his passion, but so too did painting. At its height, his collection ran to some 200 works, most of them of very high quality.

You will be able to hear music by the Duartes in The Snijders&Rockox House, but also at the Wednesday Concerts at the Vleeshuis: