The Snijders&Rockox House - Exhibition - Past - Results from #10
MENU

* The decorative beauty of its plumage

As part of The Golden Cabinet season, the Antwerp Royal Museum of Fine Arts and the Rockox House Museum are organising a number of small-scale exhibitions. The Parrot is the third such exhibition in the series.

Following the stunning restoration of The Holy Family with the Parrot by P.P. Rubens (KMSKA), a work that has been given pride of place in 'The Golden Cabinet' exhibition, we are turning our attention to the parrot in the pictorial art of the 16th and 17th centuries. Its magnificent plumage was a feast for the eye and a source of inspiration for countless artists. 'Beauty', 'wisdom', 'virginal', 'exotic' and 'lover' are just a few of the many predicates assigned to this bird.

Besides Rubens' work, interpretations of the parrot by Savery, Fijt, Jordaens, de Heem, Dürer, Schongauer and other artists will also be on display.

From Patinir to Ribera. Saint Jerome in Words and Images

Jan Sanders van Hemessen’s picture of Saint Jerome occupied a place of honour in Rockox’s art gallery or groote saleth, where P.P. Rubens’s famous Samson and Delilah deservedly hung, and is currently the only work from Rockox’s original collection that is now in situ in the museum that was his house.

What we are attempting is to determine St. Jerome’s place in the pictorial art of the Renaissance and the Baroque in Western Europe. During the sixteenth century, he was the subject of thirty per cent of all portrayals of saints, and remained of great importance in the pictorial art of the seventeenth century, too, being an iconic figure for the Counter-Reformation and humanism.

The Golden Cabinet presents : Bound in Friendship.
The liber amicorum or friends’ book in the sixteenth and seventeenth century 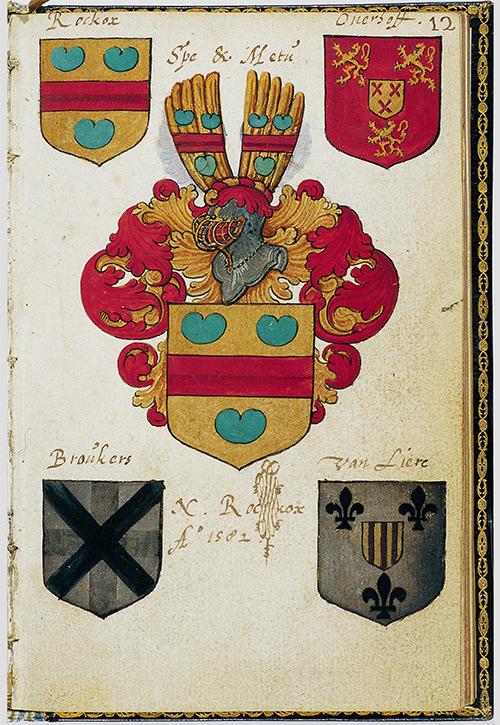 Een pagina uit Rockox's vriendenboekje, copyright collectiebeleid Bart Huysmans / Michiel WuytsFriends’ books were prized possessions in the sixteenth century, too. The world was opening up and students sought adventure, going far abroad to enrich their knowledge, despite the fact that, in Leuven, the Southern Netherlands had a renowned university town; favourite countries were France, Italy and Germany. The friend’s book was treasured by the student and was often offered to close fellow students, professors and relatives for them to contribute comments, quotations dedictations – frequently finely illustrated – to it. It gives us the opportunity to seek out the student and trace his social network. Nicolaas Rockox, too, had a liber amicorum and this is exhibited here in company with fifteen friends’ books of his contemporaries.

(Altarpiece, The Adoration of the Kings, 1525, copyright KBC Erwin Donvil)

From Tuesday 11 December 2012 up to and including Sunday 13 January 2013, the Rockox House will be busy preparing for the project The Golden Cabinet, and will therefore be partly closed. Two rooms will remain open, however, to display several Christmas treasures from the Rockox collection. Entry is free to all.

The Rockox House will be fully closed to the public from Monday 14 January to Friday 1 February 2013 inclusive.

For the exhibition Summer in Rockox’s Garden: share his passion! the inner courtyard of the Rockox House has been turned into an evocation of the sort of seventeenth-century garden retreat that a patrician like Nicolaas Rockox would have had. In order to set the scene properly, the Rockox House Museum has joined forces with the Artesis University College Antwerp. Students of the Painting Department have decked out the Rockox town garden with paintings, perspective views on the doors, exotic birds on boards against the wall and trompe-l’oeils against the windows and in the cellar windows; students of the Ceramics Department have embellished the garden beds with a variety of ceramic pots in typical majolica colours; and students of the Sound Design Department of the Royal Academy of Fine Arts, lastly, have equipped the garden with a series of surprising sounds, based on the four elements of water, fire, earth and air. Displayed in the museum itself are rare seventeenth-century tiles picturing flowers, plants, insects and birds; also on show are some of the sources from which the tile decorators drew their inspiration – among other things, fine engravings from the like of Adriaan Collaert and Stradanus. Botanical books also served as a model for the tile decorator, and Rockox had quite a number of them; in his time, they were valuable items, costing as much as a family car todayn.A visitors’ guide is available free of charge.