This is the quietest room in the house, Rockox’s former study, and now an oasis of peace. Where better to enjoy the quiet than surrounded by nature? Gazing at these landscape gems feels like taking a journey. Nicolaas and Adriana rarely travelled, despite her Spanish roots and the international network he enjoyed as burgomaster for external affairs. But you can lose yourself in landscape paintings too. Although they are often idyllic and virtually never true to nature, they bloom, proliferate and decay. Urban landscapes are more realistic and can be identified from their waterfronts and distinctive towers.

Joachim Patinir came from the Dinant region and is viewed as the first autonomous landscape painter in the Low Countries. Immerse yourself in the paintings and you will quickly sense how the horizon is used as an axis in the presentation of these images. It is placed higher in one landscape than in another, while some artists were quicker to master the perspective technique than their colleagues. Patinir uses the landscape here to stage a performance of a saint’s legend, namely the moment when Christopher carries the Christ Child across the river. All the same, the landscape dominates the religious scene. 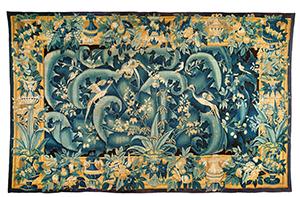 The walls of the most important rooms in noble castles were hung with pictorial tapestries, mostly in series of biblical, mythological or historical scenes. There was also a strong demand in the 16th century for ‘verdure’ tapestries – which were cheaper than the pictorial ones – on the part of the lesser nobility and the emerging middle classes. Verdures could be woven faster and were often less refined. Here we see stylised flamingo flowers in the middle against a dark background. Delicate flowering vines wind between them and the overall effect is completed by birds, both large and small. The border consists of impressive vases, some filled with plants.