The ‘Gulden Rinck’ is a large house and we are now on the street side, where the utility rooms are located, including this laundry. Doing the washing isn’t a very exciting theme, though, so we focus here instead on leisure! Going to the fair, playing the bagpipes and drum, and games of dice and cards were all great fun for the common folk. The social elite preferred more stylish leisure pursuits. Collecting art and objects from nature, playing tric trac and chess, reading, horse-riding and hunting were their idea of entertainment. Word-games were popular too, as recalled by the dozens of Flemish proverbs that Brueghel depicted through scenes of everyday (and not so everyday) actions. 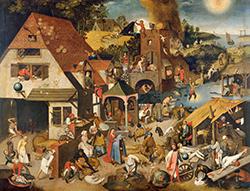 Little is known of Pieter Brueghel the Younger’s life. He was born in Brussels as the eldest son of the famous Pieter Bruegel the Elder (whose sons added the ‘h’ to their surname). This painting is a faithful copy of the one Pieter the Elder made in 1559 (now in Berlin). The more than one hundred proverbs can be split into two groups. The first illustrates the absurdity of human behaviour and turns the world on its head, as symbolised by the globe with the cross pointing downwards. Such illogical conduct could give rise to sin, as represented in the second category of scenes. A good example of these is the one showing the unfaithful wife who puts a blue cloak on her husband.

Teniers continued the tradition of the Bruegel dynasty and sought inspiration in rural life. The two seated players take their first look at their hands. The scene is played out in silence, but the body language suggests which player Lady Luck has favoured and has probably been dealt the best cards. The monochrome painting of the interior is relieved by just a few touches of colour, such as the luminous red of the cap. Teniers has succeeded in his depiction of a card game in making tangible a moment of silence, concentration and tension.

This tranquil scene with the Adoration of the Magi includes a magnificent greyhound on the right – a breed viewed as a dependable and loyal companion, and which develops a very strong bond with its owner. Greyhounds are also excellent hunting dogs and served in mythology as a symbol of the hunt in images of Diana. On the other side of the painting, a falconer can be seen with his bird of prey on his arm. Falcons and greyhounds were the most popular animals used in hunting.

The exterior doors of this ebony cabinet conceal drawers that held precious objects such as valuable documents, coins, diamonds, jewellery, embroidery and lace. Pieces like this were therefore symbolic of expensive trinkets. Rare flower bulbs were also stored in drawers of this kind. There is a ‘perspective’ or mirror chamber in the middle of the cabinet in which small precious objects were often placed. Depending on the position of the object, you could see it in one mirror but not the other – an optical game that was much loved by the well-to-do. The ebony is engraved with biblical scenes and spring and summer-blooming flowers.