The inventory of Rockox’s estate includes a great deal of information about the kitchen, the scullery and bottelrye. Rockox’s kitchen included a pantry or keuckenschappraye, as it was called at the time, crammed with pewter plates, dishes, sauce bowls, spittoons, a water pot, silver candlesticks, sugar sprinklers, powder tins, salt cellars, spoons, forks and cups. There was a fireplace too, and also the scullery for the dirtier chores. This too has a collection of iron, copper and pewter utensils, which refer to real cooking – spits, grills, frying pans, colanders, a hob and a whole set of equipment for baking waffles. The bottelrye’, lastly, was a storeroom for large objects. 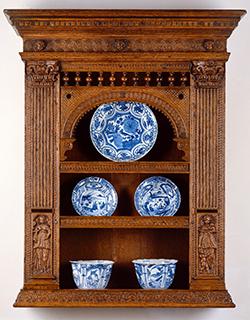 This wall-cupboard is used to display a selection of Chinese Wanli or ‘kraak’ porcelain. Wanli (1563–1620) was the last emperor of the Ming dynasty (1368–1644), while the term ‘kraak’ derives from the type of Portuguese ship known as a ‘carraca’ (carrack), which first imported it to Europe in the late 16th century. Mainly used for dinner and tea services, it was extremely delicate and almost transparent The characteristic decoration is a typical sectioning into wide and small panels generally applied vertically. The panels contain motifs, including Taoist symbols and flowers, and the lotus flower and the artemisia or sagebrush leaf, which were among the ‘eight precious things’ and symbolised prosperity, good fortune or wealth.

This old lady seems to be sitting by the window and looking out. The cap she wears on her head could indicate that she ran the household for a wealthy patrician family. The sketch is deft and lifelike and the woman served as a model for paintings by both Jordaens and Rubens. This is probably not a ‘portrait’ but rather a character sketch of a ‘typical lower-class woman’.

Willebeeck mainly painted fruit and ornamental still lifes and vanitas motifs.
This work, too, is a fine example of the theme of transience. To illustrate the passing of time, Willebeeck turned to everyday objects that refer to vanity or shallowness. The overturned rummer, the tazza and the Westerwald jug are empty, the lit cigar is going out, the pipe has been extinguished and the shell is now bereft of life. Here, Willebeeck is pointing chiefly to the transitory nature of luxuries, drink and the intoxicating pleasure of tobacco.

Venetian glass-blowers came to particular prominence around the mid-15th century, when they succeeded in producing colourless glass, which was often enhanced with decorative elements in enamel. Paintings of picture galleries and depictions of curiosity cabinets from the 17th century often feature examples of Venetian glassware. Although the secret of these glass-blowing techniques was supposed to stay in Venice, and more specifically in Murano, from the second quarter of the 16th century on, celebrated glass-blowers were lured to other European centres by all sorts of privileges. Façon de Venise glasses came in this way to be produced in Antwerp too.